Create an Account - Increase your productivity, customize your experience, and engage in information you care about.

The people of Lancaster have valued libraries from the very beginning. The first library was provided by Mrs. Lou White who lived at the end of Centre Street. Mrs. White shared her own library with others, providing the first known lending library in Lancaster.

The library eventually moved to the second floor of Mrs. White’s bank, The White Bank. This bank was located on the town square in Lancaster. The library opened on October 27, 1924. Its hours of operation were from 3 to 5 p.m. on Tuesday. The Shakespeare Club supported the library with Miss Nell Lyon, a member of the Shakespeare Club, volunteering as the librarian. The White Bank was forced to cease operations in 1930’s when all private banks were closed due to the Great Depression. The Bank reopened as The First National Bank of Lancaster. The library continued to be housed in the bank for 17 years. When Room 1 was no longer available, a new place had to be found for the library. 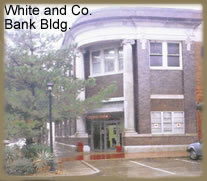 The Lancaster Library opened April 25, 1940 under the Dallas County Branch Library System. The library was housed in the Lancaster Community House in a small cloak room.

Miss Nell Lyon resigned as librarian in 1966 after serving for 26 years. Mrs. Zelta Nanney was appointed to be librarian. The new library was completed on April 7, 1968 with Mrs. Billie Taft as librarian.

Between 1983 and 1985, the library subsidy by the Dallas County Library System disappeared. The City of Lancaster increased its funding and assumed full responsibility for the library in 1985. The Lancaster Veterans Memorial Library joined the Northeast Texas Library System (NETLS) in 1986. Mrs. Billie Taft retired in 1992 after 25 years of service. Susan Andrews was hired as her replacement.

On April 25, 1994 Lancaster experienced a devastating tornado that ravaged the library. The renovation was complete on July 22, 1995.

In January, 1995, the citizens of Lancaster approved the 4B tax referendum. This ½ cent sales tax was used to build a new library on grounds north of Pleasant Run Road that also housed a new Recreation Center. Miss Andrews had resigned a few months before the completion of the new library.
On May 6, 2001 the new Lancaster Veterans Memorial Library (LVML) opened. In July, 2001, the City of Lancaster contracted with the library management corporation, Library Systems & Services LLC (LSSI) to run the library. Mrs. Cami Loucks was hired by LSSI as the Director, and within 2 years was named the NETLS Director of the Year.

The new library is a 1 story 23,000 square foot building. Nearly 1 third of the building is designated for usage by the staff (offices, workspace, storage, etc.) The remainder of the building includes a public meeting room, quiet reading lounge, study room, restrooms, the Welton R. and Mildred Chapman Fail Genealogical Center, and a vast area for computers for citizen’s use.

Significant grants were obtained to upgrade computer and web technology, audiovisual technology, library automation technology, and network technology. With the assistance of program grants, the number of children’s programs doubled to accommodate the large turnout of children at the Summer Reading Club performances.

As a continuing participant in the State Library’s Loan Star grant program, the library is able to offer TexShare Cards to qualifying library patrons, permitting use of other Texas library’s collections. The Best Southwest Bookfest, the largest of its kind in the north Texas region, is a major annual project of the library, in collaboration with the public libraries in the Best Southwest Dallas County area, and with the University of North Texas, Dallas campus.